Aborted Babies’ Graves to be Honored Across America–Saturday, Sept. 12 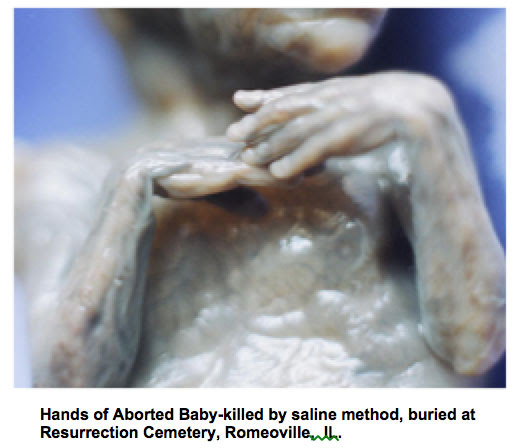 September 12, 2015
National Day of
Remembrance for
Aborted Babies
115 Memorial Services Planned Across the Nation—42 at GraveSites Where Aborted Babies are Buried
While the Abortion Industry Kills the Unborn and Sells Their Body Parts—Pro-lifers Remove Their Bodies From Trash Bins and Bury Them
For the location of all memorial services see:

http://www.abortionmemorials.com/
The third annual National Day of Remembrance for Aborted Children, Sept. 12th at gravesites and memorials all over the country – this year takes on a new significance in light of a series of undercover videos from the Center for Medical Progress that show Planned Parenthood officials trafficking in the organs and limbs of aborted babies.
“The recent revelations about abortion giant Planned Parenthood’s practice of harvesting and selling body parts from aborted babies makes it all the more important for those of us who love these children to visit their gravesites,” said Eric Scheidler, executive director of the Pro-Life Action League, which is sponsoring the memorial with Priests for Life and Citizens for a Pro-Life Society.
“This small handful of aborted children whose bodies have been buried in sacred ground — rather than incinerated, flushed down the drain, or dissected and sold for profit — represent all the tens of millions who have been abandoned since abortion was made legal,” Scheidler said. “Let us visit them on September 12 and mourn as we should for all of abortion’s unborn victims.”
Solemn prayer vigils will be conducted at many of the 47 gravesites of aborted babies throughout the United States, as well as at dozens of other sites dedicated in memory of aborted children.
Tens of thousands of aborted children have been retrieved from abortion centers and other facilities and given the honor and dignity of a burial. The stories of how they were killed, how they were found, and how they were buried, along with the pictures and videos that document those events, can be found at www.abortionmemorials.com,
which also has a list of burial sites and services.
Father Frank Pavone, National Director of Priests for Life, said leaders of the pro-life movement have long known about the sale of baby parts but now the rest of America is catching a glimpse of the true nature of abortion.
“Finally we are seeing the baby – not the fetus, not the products of conception – but the actual child who is killed in abortion,” he said. “The strong support we see for these memorial services put the abortion industry on notice that this nation is quickly reaching the point where we will no longer tolerate this barbarism.”
The National Day of Remembrance, Father Pavone said, “creates a focal point for our grief, both national and personal, and for the education of future generations. These services also will provide opportunities for an urgent call to healing after abortion for the women who have suffered from this terrible choice and are now grieving again as they watch the undercover videos that show the truth about abortion.”
Monica Migliorino Miller, director of Citizens for a Pro-Life Society noted that, “Since 1973, 58 million human beings have been killed in legalized abortion. This is a national slaughter — and so few, indeed a mere fraction of those human lives, managed to find their way into a human cemetery. The recent undercover videos that show Planned Parenthood officials haggling over the sale of aborted baby body parts reveal that indeed human beings are killed in abortion as their torn bodies lay in the back rooms of these clinics. Those bodies will never see a humane burial.
“When we honor the graves of the aborted unborn we pay honor to all the unwanted unborn.  How ironic that the last work of mercy, to bury the dead, is for the first work of mercy these buried aborted babies ever knew. The least we can do is honor them and allow their voices from the grave call us to end the injustice of abortion.” 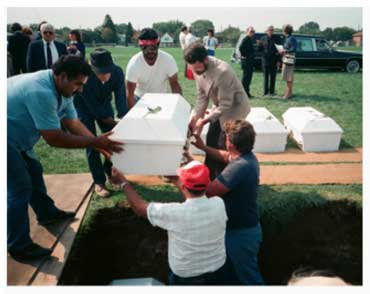 Coffins containing the bodies of 1200 aborted babies are buried at Holy Cross
Cemetery, in Milwaukee, WI.

For more information about the National Day of Remembrance, including the stories behind the gravesites of aborted children and the locations of memorial services being held September 12, visit AbortionMemorials.com.

This site uses Akismet to reduce spam. Learn how your comment data is processed.